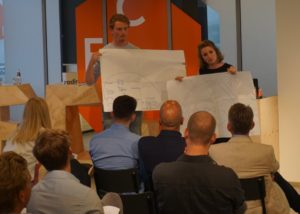 The evening was kicked off by Kristiaan Tetteroo who introduced the Young Peterson and Control Union and her sister companies event as an initiative to achieve cross-pollination between Peterson and Control Union; to share and discuss how, as a group, Peterson can achieve common objectives or exploit new business opportunities around the topic of circular economy.  A circular economy is an alternative to a traditional linear economy (make, use, dispose) in which we keep resources in use for as long as possible, extract the maximum value from them whilst in use, then recover and regenerate products and materials at the end of each service life.

To engage and provide our colleagues the opportunity to establish relationships on a cross-divisional or cross-entity level, groups were randomly formed. Through a business game, the 5 groups were given the task to brainstorm on opportunities in the field of Circular Economy and how Peterson, Control Union and other entities can play a significant role in this young and sustainable industry.  The business game required participants to come up with a supply chain system that would create as many jobs as possible for the Peterson Group by reducing, reusing and recycling. Fran and Alex both presented Aquaponics as an example system, introducing this concept in relation to MEP’s industry to our Peterson colleagues.

All of the groups have put major effort in putting together and presenting their unique proposition on how they see the role of Peterson and Control Union in the business opportunities of Circular Economy.

MEP look forward to attending the next Employee Networking event.