Portrait of a Fisherman: Solomon’s Story 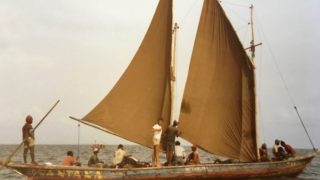 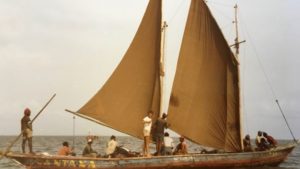 Today, the team of World Bank-funded West Africa Regional Fisheries Program (WARF-P)and I would like to pay tribute to Solomon Kamara, his family and peers, who are emblematic of the interconnections among fishing, livelihoods, food security, and communities in Sierra Leone. In recent years, we have delivered on our promises to Solomon to curb the invasive industrial trawlers. And we have still much more to do for the current and future generations.

I first met Solomon in the early 1980s on Sierra Leone’s Plantain Island, when he volunteered his canoe for a trial program modernizing sails to reduce dependence on petrol for outboard engines. Solomon soon became my friend, and I followed his fortunes and struggles as a fisherman working on Yawri Bay.

Solomon died before he could see the positive outcomes in sustainable fisheries management in West Africa. I especially wish he could have reveled in recent reduction in illegal fishing and large scale industrial trawlers that in previous years had taken away his livelihood. Instead, the narrative of his life captures the harsh existence of fishing communities and the added burdens they have had to bear as successive governments failed to manage the once limitless fishing on which they all depend.

He grew up in the Sierra Leone of the 1950s and 60s on Plantain Island. Fish of all kinds were plentiful. The

gines and larger ring nets transformed the fishery in the 1970s, allowing canoes to range much further from land and to find larger stocks of small pelagic fish further out in Yawri Bay and beyond. Fish production increased, more trade followed, and Solomon’s family and community prospered. By the early 1980’s Plantain Island had become a hub for fisheries production in southern Sierra Leone and Solomon had become captain of his family boat, fishing with a mixed crew of relatives and community members.

From dawn till dusk, the fishing day on Yawri Bay was the center of all social and economic activity. The canoe left at first light after a night of preparation.  The team caught enough fish to pay for fuel, feed the family and trade fish to all parts of Sierra Leone. Many days the landings were as much as the men could handle on board, with plenty for the women to, smoke and trade inland.

This pattern of life provided significant benefits to the Plantain Island community and Solomon told me he was confident he would be able to provide his children the education that he was denied.

The arrival of large industrial trawlers, however, proved to be a silent catastrophe for Plantain Island, Sierra Leone, and much of West Africa. The 1980s was defined by the increasing presence of legal and sometime illegal foreign industrial vessels in the waters of Sierra Leone—some as large as floating factories. These

mostly Asian vessels that had started operations offshore moved steadily further into Yawri Bay in search of the smaller fish and shrimp their markets demanded. On many occasions there was direct conflict between trawlers and canoes searching for fish or retrieving nets. Direct contact between artisanal fishers and trawlers sometimes ended in loss of life at sea.

Fishermen also started to see the effects of trawling on the fish resources. Trawlers were using two vessels with one large net between them so they caught all species–from the bottom-dwellers to the surface stocks of small pelagics targeted by Solomon. Successive governments allowed these trawlers to multiply and the fish catches for the people of Sierra Leone were greatly diminished.

Solomon and his fellow fishermen would often find large volumes of dead rotting fish thrown away by foreign trawlers floating on the surface, fish that could have been processed for markets in

the interior of Sierra Leone.

The national fishery was in decline by the 1990s. This was also a period marked by the strife and turmoil of civil war, leaving all sectors without governance.  Solomon realized that the education he had hoped to provide for his children was slipping away as revenue dwindled and it became ever more tough to survive.

For the Plantain Island fishermen and their families, these events were calamitous. The loss of transport links reduced their markets, spare parts, and access to fuel. The trawlers returned in bigger numbers, fishing right up to the coast. Solomon’s children were proud of his work and the positive changes in Sierra Leone’s artisanal fisheries. Credit: Stephen Akester/World Bank.

Solomon’s life had not worked out as he had once hoped. By 2008, his surviving sons were working with him, their larger canoe had been abandoned and they were reduced to a small paddle canoe catching only enough for family consumption. I met him again while visiting Plantain Island as part of a fact finding exercise for the WARF program designed to bring management to regional and Sierra Leone’s fisheries.

Only 58, he appeared so much older than his years. The meeting was a sad affair as Solomon had little strength. But his story and the pleas of his community couldn’t have been clearer: If the industrial trawling could not be stopped, there would be no future for the fishermen of Yawri Bay. That same year, Solomon passed away, but the journey of his life and the messages he gave us became the central objective of the West African Regional Fisheries Project (WARF-P). The program has been investing in sustainable fisheries management, community resilience and improved livelihoods for coastal communities since 2009.

If Solomon lived today, he would se

e the foreign trawlers better managed with the establishment of the 6-mile inshore exclusion zone for community fishermen. By mid 2010 he would have seen the stocks of fish reviving and his community return to profitable fishing by 2014 with the support of WARF-P and its partners. Solomon would surely have been an active member of the now established community management association for Plantain Island. The success of fisheries management in the program’s first phase has been followed by an increase in artisanal fisheries. The strengthening of fisheries management for the development of a truly national fishing industry for is why the program continues its commitment to West Africa’s fishery.