Stephen Akester at the China Dialogue

Stephen Akester from MEP and adviser to The World Bank, attended the China Dialogue event on Tuesday 25th September, 2018, where he painted a striking picture of the state of West African fisheries.

He explained that the majority of people in coastal nations in West Africa rely on fish as a protein source, and yet foreign mega trawlers are now competing with local fishermen and traditional boats for the same resources. 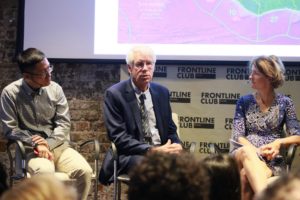 Stephen Akester At The China Dialogue

Chinese boats are very active in the region: 95% of trawlers in Ghanian waters are from China, 98% of those in Liberia’s waters, and 80% of those in Sierra Leone. The countries are often locked out of the economic benefits of their own waters, as Chinese boats fish unsustainably, resulting in mass depletion of fish stock which is impacting the local fishermen and the people who rely on them for food.